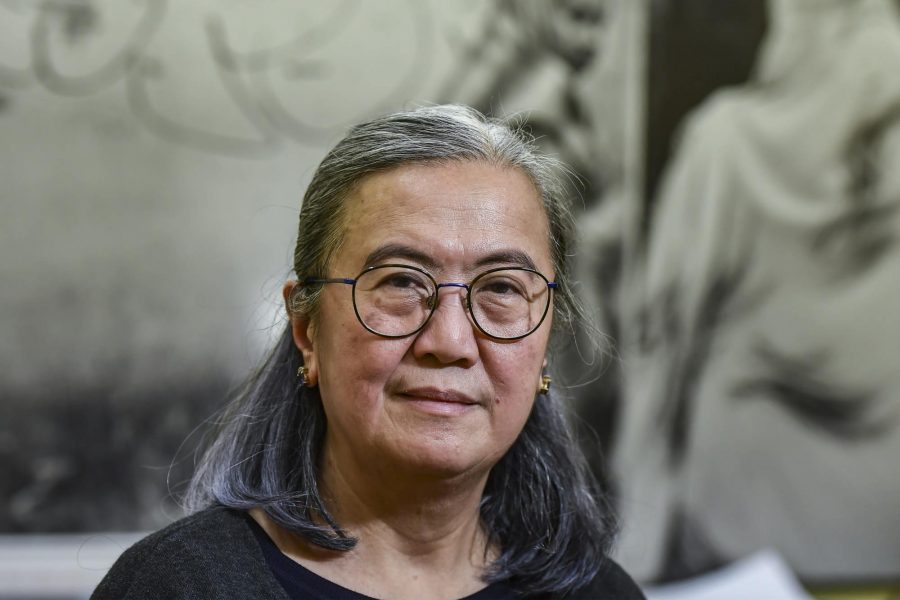 Deborah Carlos-Valencia, 70, emigrated from the Philippines to Greece in 1985. She is the co-founder of Melissa Network, which brings together leaders of the established migrant community in Greece with new arrivals to collaborate on integration.

HISTORY OF WOMEN’S RIGHTS IN GREECE

1934: Women (over 30 who completed a primary education) can vote for the first time at regional elections.
1986: Abortion becomes legal.
2000: The Constitution expresses the responsibility of the State to take measures for eliminating discrimination against women.
2008: At least 1/3 of the parliamentary candidates of each political party need to be women.

When did you come to Greece and why?

I came here in 1985 during the Marco dictatorship [in the Philippines] with my husband and son, who was just five years old at the time. We left the country because my husband and I were very involved in the democratisation movement.

What was the situation for migrants like when you first arrived in Greece?

I was quite difficult for us, we were all uprooted. We had a hard time dealing with the immigration office because they weren’t friendly.

My husband and I quickly realised that there were many women from the Philippines working as domestic workers in Athens who faced a tonne of issues. Most of them were undocumented, didn’t have social benefits or health insurance and were being exploited by their employers who would hold on to their passports, pay them measly salaries and not give them days off. Some were even forbidden to mingle with other Filipino women.

Even though they were busy, we set up meetings with them every weekend. It was important to create a strong organisation with support and [concrete] community action.

Is that how Melissa, the network you co-founded in 2014, was formed?

Back then, we put a call out for organisations to create a network of migrant women from different nationalities. We felt as though we never really had the chance to speak about what we’d been seeing. We had made contact before, but it was too general and not substantial enough. When more than 100 women from 30 different countries showed up, it motivated us to set up Melissa. With our first round of funding, we rented a place and tried to make it feel like a home and safe space. Somewhere women can fully express themselves without hesitation or fear of rejection.

What is different for migrant women today compared to 30 years ago?

Migrant women are mostly working in private domains like houses, so they’re not that visible in the public sphere. Today, they’re most organised and outspoken about their rights as well as the issues they face. There are more opportunities for them and they’ve become more confident about their contributions to society.

During the refugee crisis, you provided educational and psychological support to refugee women and children. Why did you decide to do so?

As migrant women, some of us embarked on the same journey. We share our own experiences of what worked and what didn’t, creating a synergy between long-term migrants and newly-arrived refugees women so that a wider community of solidarity and sisterhood is formed.

Women come to the [Melissa] centre and they know they’re at home. Most of them have experienced trauma so it’s been hard for them, but I think that being in a place where they feel respected creates a sense of trust.

“In the refugees crisis, European leaders aren’t doing their share of the work equally. “

Do you feel like you’ve created a service that wasn’t at your disposal when you arrived?

For me it’s mutually empowering. We were able to survive and create a strong bond without any organisation helping us. But in creating a circle in which other women can learn and help their own communities (and beyond), there’s a ripple effect. Other women are benefitting too.

What do you think about the European Union’s approach to the refugee crisis?

Leaders aren’t doing their share of the work equally. Greece has taken more of its share, while other European countries – especially richer ones – need to take responsibility and provide support.

What has it been like for you being both Filipino and European? What’s it like being a woman in Asia versus Europe?

Being an Asian who’s lived in Europe for decades has allowed me to see both cultures more clearly. From what I’ve observed, machismo reigns in Greek everyday life and it’s more noticeable than in the Philippines. In both societies, especially in older generations and in rural areas, men consider themselves the head of the family. I’ve also noticed that, among the younger generation, women work and there is more sharing when it comes to household chores and childcare.

Which of your identities come first: Filipino, Greek or European?

My heart, the very core of my being, is and will always be Filipino. However, the core values of humanity are shared by all, regardless of ethnic identity.

“There hasn’t been any #MeToo movement in Greece probably because women don’t feel safe enough to speak up.”

And what does Europe and Greece mean to you then?

For me, Europe symbolises a strong sense of solidarity, freedom and democracy. Greece, where democracy was born, had a strong influence in the cultural and socio-political development of Europe. It’s sad that the core values of humanity are being eroded by nationalism and populism. I really believe that migrants who had to flee from their home countries can revive a core set of humanitarian values that are being lost here.

What is the most significant problem for a woman living in Greece?

For the refugee women I work with, I’ve noticed that many of them have experienced gender-based violence. Women from other countries are no exceptions either. That, and the fact that their participation in entrepreneurial activities is limited.

Why do you think there hasn’t been a #MeToo movement in Greece?

Probably because women don’t feel safe enough to speak up; they don’t feel a sense of support or solidarity from other women in the country. That’s why it’s important for all women in Greece to come together. We believe we can support each other, build a sense of solidarity and amplify women’s voices.

Are you satisfied with the political participation of women in the country ?

I think there are less Greek women involved in politics. Because of the situation [the country is in], there’s a strong need for migrant women to be more proactive with regards to economic independence, for example. There’s more of a push to get active and get involved. Greek women are in their home country, so life is easier for them.

“I’d like to see more women involved in policy-making.”

What about women in general? Where do you think there’s room for improvement?

I think I’d like to see more women involved in policy-making. That way, they could create laws that protect the rights and interests of other women. But it’s important that women are equally represented in every sector.

What were some of the biggest challenges you’ve faced over the years?

Yes, several times [laughs]. In 1986, we decided to create our own kindergarten. There was a strong need for it because kindergartens were only open until midday and the women in our community usually worked longer. We had to rent different places and always faced problems; the police visited regularly, neighbours threw water at the kids and state officials said the spaces weren’t suitable for children. But with some patience and help from Greek organisations, we worked hard, found a better place and got our permit in 2011. Can you imagine that we had started in 1994?

We were persistent. As migrants, we knew we had the capability to improve our community’s situation. At first we only had Filipino children, but now there are kids from 17 different countries.

Did you ever feel held back because of your gender?

Yes. Being a migrant and a woman is like double marginalisation. I’m a woman before I’m a migrant, but that second identity… I felt it. The outcome of my setbacks was learning how to pursue what I truly believe are needs for the community. I requires patience, and I have that. Kasapi, the older organisation we founded, is the only migrant organisation that managed to build a kindergarten that’s still open today.

What are your thoughts on the stereotypes of migrant and refugee women?

I can answer that question with a real-life example. I was invited to a conference with one of the women I work with. She wears a veil and comes from Afghanistan. After sharing her own experience, someone in the audience asked why she had to wear the hijab. She answered that it’s custom in her country. Later, she came to me and said she hated that question. When I asked why, she said: “Because there are other issues we’re facing, like the fact that many Afghans don’t have houses and are living in camps or squats. Still, they prefer to talk about my veil.”

In Melissa, the veil has never been a problem of acceptance among the women we work with. I think women are less concerned about [appearance] and are more focused on building trust and accepting one another.

If you could, what change would you make to Greek law to improve the life of women?

Comprehensive integration for migrant and refugee women. That includes getting legal status independent of their husband’s, ensuring their access to social and educational services, equal rights, and being able to exercise their social, economic and political rights.