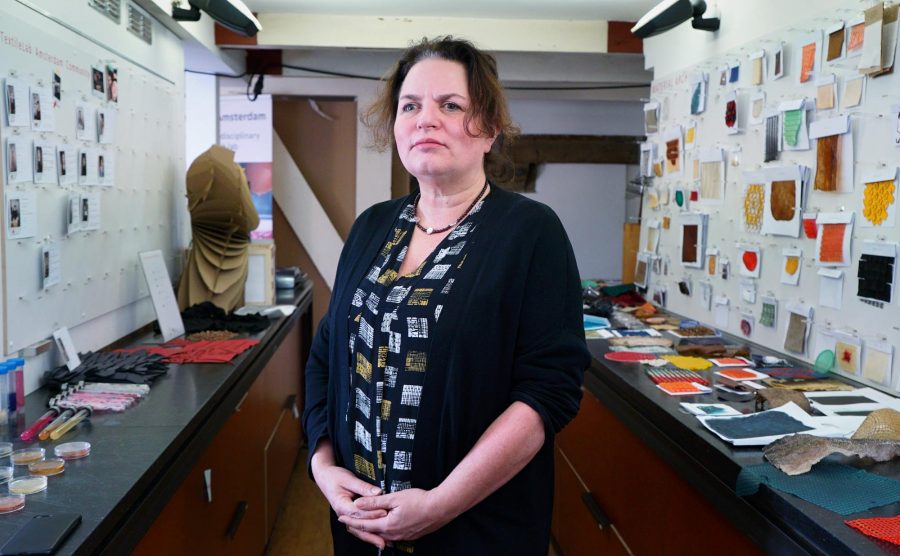 Marleen Stikker, 55, is an Internet pioneer and fights for a fair, open and inclusive online world. In a tech world dominated by men, she co-founded the Fairphone and set up the Waag Society, a research institute for creative technologies and social innovation.

1962: Marleen Stikker was born.
1993: The Digital City, the first virtual community introducing free public access to the Internet, is founded.
1994: Creation of ‘Society for Old and New Media’ together with Caroline Nevejan. In 1996 it became the Waag Society.
2013: Fairphone, the first sustainable, conflict-free smartphone was launched.

HISTORY OF WOMEN’S RIGHTS IN THE NETHERLANDS

1919: Women were given the right to vote.
1977: Appointment of a state secretary to coordinate and to promote an emancipation policy, supervised by a special ‘Emancipation Council’.
1984: Abortion is legalised.
2000: Liberalisation of law on prostitution. Legalisation of regulated brothels.

I’m interested in how things work; what’s inside systems. If you present me with a black box, I’ll want to open and understand it. I studied philosophy which, in a way, is like studying the meaning of everything: how we understand the world, how it’s all connected.

In the mid-80s and for a long time, personal computers were there to help us organise ourselves. In a way, they were a democratic tool. But soon after I realised that technology has a meaning, it’s made for a purpose and there’s an intention to it. So I started working with artists. Exploring what technology is has been really fun.

What it’s like to be a woman in the tech world?

It’s been an issue, of course. But when people start addressing me as ‘a woman in technology’, I stop wanting to engage with them. I don’t understand what the problem is. I am a woman in the tech world, but I’m not the only one, so why is it so special? I don’t just want to be seen in that way because [above everything] I’m a person, a human being.

Do you think that the #MeToo movement affected your field?

A lot of strong women are defining the culture in the Waag Society. I think it’s quite open and multilayered. I was raised by a very independent woman; her strong sense of self is something she passed on to me. She always supported me in pursuing my dreams. For her it was normal to be financially independent, swim against the current and not fit in. It’s really nice to have that as my heritage, a way to identify myself.

Could you tell me a little more about your mother?

My mother got pregnant with me when she was still a student but that never stopped her, even if stopping was commonplace at the time. I wasn’t even 1 when she got divorced and she raised me on her own. Taking these decisions, being financially independent, only living with women, having lesbian affairs and relationships… Growing up, I didn’t know how to explain the fact that there were two women in the house. Some people understood while others just didn’t talk about it. Back then, I wasn’t officially saying that my mother was a lesbian; it was nice because it wasn’t a label. My mother never really came out of the closet because she had never experienced the closet, she was just living the life of an independent woman. Perhaps my feeling of not wanting to be labelled as a woman in the tech world came from the environment I grew up in…

Do you consider yourself a feminist?

I’m a humanist. Being labelled as a ‘feminist’ is problematic for me. We live in a democracy, I don’t see why it’s only women and not men who have to care about feminist issues. I also think that sometimes it’s hard for me to only identify with women. Not that I don’t like it, but it’s more about not being able to draw a divide [between genders]. I can see how being a man can be problematic as well.

What’s demanded of us, the way we’re raised, what is considered successful… What’s important to me is the value you, as a person, bring to the table. Maybe women are more equipped, thanks to their upbringing, to be the changemakers right now. Women have been excluded from economic and political systems, they’re probably better suited to see the problems [we are facing].

“Women have been excluded from economic and political systems, they’re probably better suited to see the problems.”

Speaking of politics and representation: how do you see the role of women in Dutch society?

With regards to politics, financial institutions and workplaces, I think the system is still very hierarchical. [The Netherlands] is a really great place to be, to build your career, pursue your dreams and have an impact. There are a lot of opportunities. But within all of that, there are still a lot of implicit power structures that are difficult to address or identify.

With these problems in mind, do you think the Internet can serve as a more inclusive, egalitarian environment? Or are we just placing old power structures into the cyber world?

In the Waag Society, we’re working towards making technology open, fair and inclusive. At the moment, the technology surrounding us isn’t either of those.

In the early 90s the Internet became a creative commons; it was shared knowledge, built by people coming together and talking about the best way to design the next steps. But [then] the big companies came in. For the last 25 years, we’ve been warning people that this shared resource will become a market. A hardcore market. A large part of the Internet was developed by individuals looking for possibilities and sharing their outcomes. Now, 25 years on, we’re in an extreme situation in which all the technology we use can be intercepted, either by the state or by companies. It’s not just our privacy that’s at stake, it’s our sovereignty.

We live in a very strange world. What I love is that, given the extreme situation we’re in, politicians and lawmakers are finally understanding that what happened is neither helping democracy nor sovereign states. Still, I think it’s possible to reclaim the Internet’s social value, but we have to act – it’s not going to happen by itself. I think 2018 has been a game changer, but we’ll probably need another 25 years to solve these problems.

You advocate for consumers to take matters into their own hands and become makers, disrupt the current system. Could you elaborate?

There are different kinds of disruption. I love the kind of disruption that exposes hidden structures and narratives behind power.

Then there’s the type of disruption that Silicon Valley-type ventures are claiming. Disrupt, go fast and break things. We need to change that and make it more value-based; go slow and fix things. People believe in technology the way they used to believe in states or justice systems. I think we should be wary of that. It’s not the right kind of disruption because new power structures and belief systems are being built, sort of like a technological religion.

What do you think we should be focusing on in the future?

Right now, we’re optimising everything we do for humans whereas we should be thinking about other species as well. We’re neglecting non-human systems when we talk about our planet’s future. It’s a problem to think that, with all the technology we’re developing, we will be able to sustain life. It’s insane to think that our future lies in artificial intelligence or blockchain when the [carbon] footprint of these technologies are terrible. We need to understand who we’re actually serving with technological advancements, who gets to define the direction we’re heading in and who is on the losing end of everything.

That’s something we realised when creating the Fairphone. We asked ourselves important questions like: How is technology being produced? What conditions are people working in? What is technology’s life cycle? What happens when it becomes rubbish? We need to think about technology in a more holistic way. I think that’s the biggest challenge in my field, and I’ve noticed that these questions only make up a small part of the story.

What do you think about the EU’s position regarding the Internet and technology?

I think the EU is looking for a place in the tech world, but it definitely doesn’t want to become Silicon Valley… it missed that boat. The EU doesn’t come close to the big 5. We can’t compete with them so we have to do something else. Silicon Valley’s hidden narrative is this idea that technology will one day replace the state and democracy. Meanwhile, China uses technology to enforce ‘good’ behaviour. So you could say that there’s room for the EU to use technology that’s in line with societal values.

We’re at a turning point. Populist movements are against globalisation and the EU is being pinned as a globalist, capitalist institution which creates resistance – both from the left and the right. Creating a new EU identity based on its value, translocality, could be an antidote. And that’s where the Internet is interesting; it allows people to organise themselves locally in connection to other places. Act local, think global, work transnationally.