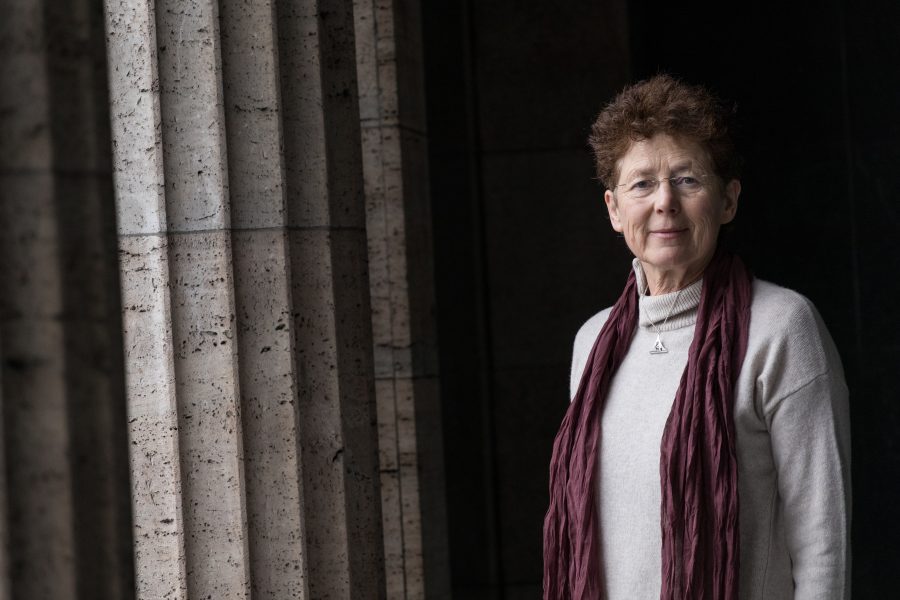 Physician Kristina Hänel, 62, was sued for ‘promoting’ abortions on her website. Today, she has become a historic figure for the legalisation of abortion in Germany.

1956: Kristina Hänel is born in Hesse, Germany.
1981: Starts working for Pro Familia, a national network of information centres focused on family planning and sex education.
2001: Opens her own medical practice in Gießen (Hesse).
2017: The district court of Gießen orders Hänel to pay 6,000 euros in damages because she “advertised” abortion on her professional website. Hänel appeals against this verdict.
2018: The regional court of Gießen confirms the 217 verdict, but expresses doubts about the timeliness of §219a.

HISTORY OF WOMEN’S RIGHTS IN GERMANY

1976: Section 218 of the German Criminal Code is reformed, abortion is now depenalised in certain cases.
1977: Women in West Germany are allowed to have a professional occupation without having to ask the consent of their spouses.
1997: Rape within a marriage is now considered a criminal act by law.
2001: The law concerning the so-called Elternzeit (parental leave) allows both parents to care for their children during the first three years.
2016: Certain big companies are legally obliged to introduce a 30% quota for women in their board of directors.
2017: The sexual crime legislation is reformed, based on the principle of “no means no”.

You’ve been working as a general practitioner for more than 30 years. Why did you want to become a physician?

I always fluctuated between psychology and medicine and at first, I was studying both. But after my first child was born that was no longer possible. I had to ask myself what was more reasonable, and for me that was medicine. I like being in contact with people, dealing with life stories. I worked for Pro Familia [a national network of information centres focused on family planning and sex education]  from 1981 until I opened my own medical practice. My time there made me political.

You start seeing structures. I realised that a lot of the things women experience aren’t just their individual fates, they are structurally determined. It’s about power.

You come from a Kassel-based [northern Hesse] family of medical practitioners. Did that tradition influence you?

My father was a gynaecologist but abortion was never really a topic of discussion in my family. I only found out from relatives that my father performed illegal abortions after WWII when I was an adult. So for a long time, I was continuing a tradition unknowingly. Back then, there were many family stories I couldn’t really grasp; the women often died and the men then married again and again. Now I know that those women died giving birth or while having an abortion.

Were there female role models in your family?

My family was rather conservative and my parents didn’t like the fact that I worked for Pro Familia. I really admired my cousin, though. In the 1960s, she studied in Frankfurt/Main, witnessed the student’s movement and was in a relationship with a Spaniard who was politically engaged during the Franco regime. All of that made a huge impression on me.

What about women that aren’t family?

Rosa Luxemburg. “Freedom is always the freedom of dissenters,” that’s become somewhat of a guiding principle in my life.

In November 2017, the district court of Gießen ordered you to pay 6,000 euros in damages because you mentioned abortion as one of the many medical services you offered on your website. They fined you because of a statute (§219a) in the German criminal code that prohibits “advertising for the termination of pregnancy.”
Why is §219a so problematic?

If physicians objectively inform the public about their abortion services, the law considers that advertising. Legally, that statute only makes sense if abortion is prohibited. But in Germany, getting an abortion is legal within the first three months of pregnancy. It’s been written in the law since the 1970s [abortion remains technically illegal according to the “Strafgesetzbuch” -German criminal code–. But there are circumstances in which a woman can get an abortion without facing legal consequences. These exceptions came into law in 1989 for a united Germany. But in the GDR-East Germany, abortion was legalised in 1972 and in the Federal Republic of Germany -West Germany, it was legalised in 1976]. And if this law exists, doctors have the right to inform people! If women aren’t allowed to inform themselves on the medical or mental consequences and side effects of an abortion, they are incapacitated. The so-called pro-life activists, anti-abortion activists, are doing this anyway. They argue that pregnant women have hormonal disturbances and are therefore not sane, which is why they have to be saved from themselves. It’s nonsense!

The statute dates back to the Third Reich, to the Hitler regime…

Exactly. The Nazis actually re-established it so that they could arrest Jewish physicians even before they committed a crime.

“Having children or not is an emotional decision, often a social one as well. “

Why is abortion still such a sensitive issue?

It’s all about ambivalences and strong feelings. Having children or not is an emotional decision, often a social one as well. Of course, there are women who clearly say they don’t want children and for whom abortion is kind of a ‘solution’. But I often experience really tragic situations in my practice. The potential father who made a run for it, another child in the family who is critically ill… Also, everyone is concerned when it comes to abortions. You either know someone who’s had one or you’ve have one yourself. And then there’s the power aspect: having control over the female body and its fertility.

You and other colleagues fighting for the abolishment of §219a are accused of “babycaust” by radical anti-abortion activists, you’re regularly sued and taken to court. How do you cope with that?

For me it was very helpful to go public. This whole system of intimidation only works if physicians feel ashamed and hide themselves.

You’re the mother of two children, a son and a daughter. How did you reconcile your work with your family?

I became a single parent rather quickly, so I reduced my working hours and ended up with half of my salary. As a physician, that was quite doable. I placed my children in a self-organised kindergarten and they had to be picked up at 12pm, begging the question of how the hell you’re supposed to work… Working mothers were ‘liberally’ allowed to pick up their kids at 12:30pm, but the kindergarten teachers got all the children ready at 12 and those who were picked up later were left standing there by themselves, waiting. As a mother, you do this once and the next time you’re there at 12. The term ‘Rabenmutter’ [meaning ‘bad mother’] only exists in the German language.

So when it comes to gender equality, Germany is quite conservative.

I’d say yes. But you have to make the difference between eastern and western Germany, they’re still very different in this respect. Shortly after the reunification, us West German women hoped we would get the social achievements of the GDR (German Democratic Republic) like a guaranteed place in daycare facilities or being able to work. I don’t want to praise the GDR as a whole, but they had made some achievements.

When it comes to gender equality, do you think that things have changed in Germany in the last few years?

They have. At the same time, there’s still a lot left to do. Take childcare for example: there are more facilities but the situation differs from region to region. In Heidelberg, you have to pay 700 euros for a spot in a daycare facility. And if you have kids, it’s almost impossible to have a career at a university or on a managing board.

What we need is an equality law, like they have in France, which obliges political parties to apply a quota system to their electoral lists. Women have to be carried into the centres of power, something that the #MeToo movement made obvious.

Speaking of power, Germany has a female head of government. What does this mean for women in the country?

I think the fact that Angela Merkel is a woman changes things. Merkel is shown more sympathy in moments where a man would be shunned. There’s also a certain pride. But in the end of the day, when women succeed in getting into higher offices, they succeed because of their femininity or because they renounce it. Of course, Merkel is a powerful woman, but she isn’t a feminist. She never uttered a single word concerning this whole controversy around §219a, not once. And right now, her party is doing everything it can to protect radical anti-abortion activists.

“I will always speak up for my goals, no matter how far they may be.”

The subject of abortion is highly controversial in the whole of Europe. Ireland just legalised abortion, Poland would like to ban it completely. Do you compare notes with physicians and activists from other European countries?

Absolutely! For many years, I’ve been an active part of FIAPAC, an international organisation of professionals working in the field of abortion and contraception. I am up to date with regards to the discussions in other countries; the abortion pill for example. I’m well connected with different people in the field, like Rebecca Gomperts from Women on Waves, a Dutch NGO that supports women with unwanted pregnancies by offering them help on a boat.

In your opinion, what would be important legislative initiatives on an EU level that could improve women’s lives?

A big issue at FIAPAC conferences is the question of conscience. The fact that, in case of doubt, physicians are able to say that they won’t perform an abortion because they can’t do it in good conscience. This is why providing women with abortions is difficult sometimes. Often times, the boss of a clinic will say that he won’t perform abortions because it’s a matter of conscience and then it’s prohibited throughout the entire clinic. Eventually, abortion will have to be recognised as a normal medical service. And in this regard, the EU could definitely do something.

Do you consider yourself a European?

Yes! Among other things, I was at Pulse of Europe in Frankfurt/Main, where this whole movement was founded. I couldn’t imagine being something different than European because I find everything that’s different to me interesting. I already know Germany. I often take part in congresses in different countries, which is enriching every time.

There is recent talk of a backlash against feminism and gender equality, meaning conservative ideas and reactionary attitudes are making a comeback. Right-wing populism is on the rise in Europe, and the far-right party AfD has become Germany’s third largest party. It seems as though many things the women’s movement has achieved are being renegotiated…

The things is that right now, we have to fight again. Generally, it’s always two steps forward and one step back. But just as the women’s suffrage, whose 100th anniversary we’re celebrating in Germany this year, became unstoppable at one point, the same will happen with the right to information on abortion. I often think of my idol Rosa Luxemburg. She and others sacrificed their lives for their convictions and objectives. That’s how history is made. I still have one realisation in mind: I will always speak up for my goals, no matter how far they may be.

*In January 2019, the German government agreed to reform §219a. While the statute still prohibits ‘advertising’ abortion, physicians and healthcare facilities are allowed to communicate their abortion services to the public. Although they are not allowed to go into detail about methods or costs, patients can refer to the German Medical Association list where this information can be found. For Kristina Hänel, §219a is still criminalising her work.