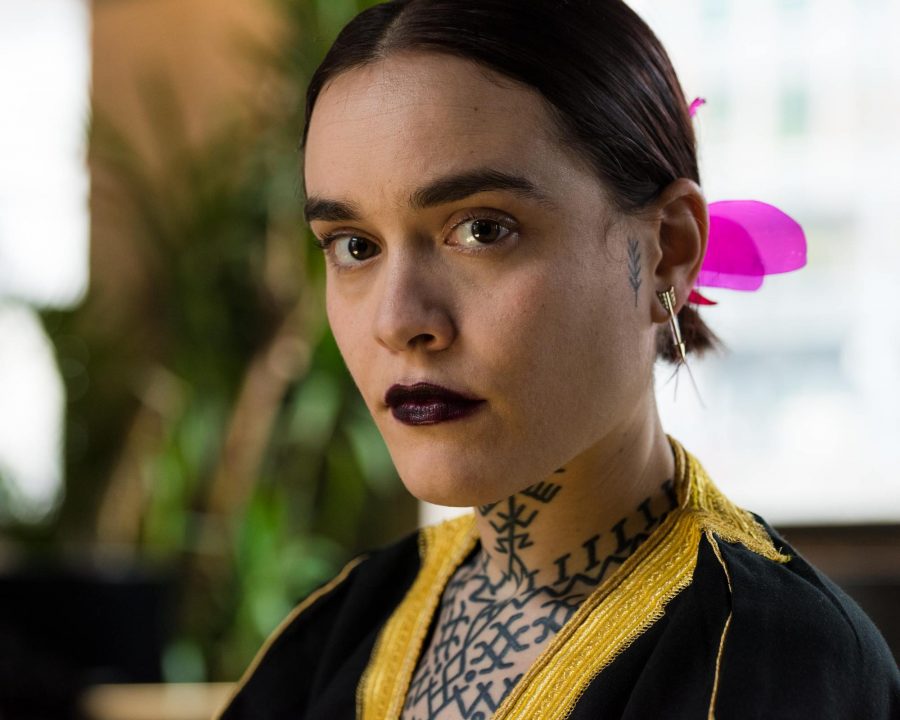 Amina Cadelli, aka Flèche Love, 28, is a Swiss-Algerian musician and composer. After completing her studies in post-colonialism and gender in Geneva, she became the singer for electro-pop band Kadebostany. With her first solo album, she is defending a spiritual approach to feminism.

1990: Born in Geneva with a Swiss father and an Algerian mother.
2009-2010: Trips to Southeast Asia and Central America.
2010-2013: Studies in ethnology and history of religions at the University of Neuchatel and Lausanne.
2018: Live performance in the UN Human Rights Hall for a TedX conference.
2019: Release of her first album, “NAGA part. 1”.

HISTORY OF WOMEN’S RIGHTS IN SWITZERLAND

1896: First Swiss women’s congress, leading to the creation of the Federation of Swiss Women’s Associations three years later.
1971: Women are entitled to vote on a federal level.
1991: More than 500,000 women go on strike, 10 years after the vote of a constitutional law on gender equality to protest the lack of its enforcement.
2002: Abortion becomes legal.
2005: A 14-week long maternity leave is implemented.

How would you describe the early stages of your feminism?

At the age of 10, I was on my way to school and a man passing by in a car whistled at me. He was my father’s age and I didn’t understand what he saw, but I immediately understood that something had changed forever. I didn’t have boobs, I looked like a child. So when this extremely violent event occured, the boys at school were allowed to just go and play. I thought about what would happen if a mother was in the car and she whistled at a little boy. What would we think? I feel like that event transported me into some kind of vortex [laughs]. After that, I spent many years thinking that being a woman was something negative and didn’t feel as though it had any benefits for me.

I grew up surrounded by women. I’m not one of those girls who don’t have girlfriends but I felt competitive at times. All these values [like competition] you’re taught in school, I had learned them well. Then, growing up, I felt more and more uneasy in my own skin and ended up thinking to myself: “Something needs to change in my percept of myself as a woman.” That’s when I started doing research on shamanism and shakti women [Shaktism is an important branch of hinduism, dedicated to several female goddesses]. Through Shaktism, I found out about red tent rituals, a global movement aimed at creating healing circles for women. Members consider, for example, that women are even more powerful when they have their periods. They call them ‘menstrual moon’ rituals. Reading up on women-friendly cultures helped me re-examine history and more importantly, re-examine how it’s taught to us.

There are many women who say they’ve never been confronted with violence and that being a woman has never been an obstacle for them. How would you suggest building solidarity and sisterhood with them?

These are survival strategies. If you start asking yourself questions, you have to put everything into perspective: the narrative of your history, your family, your friends… you have to be ready to rebuilt it all. It’s tough. I would suggest welcoming their point of view with benevolence. Remember Catherine Deneuve’s backlash op-ed, written in response to France’s #MeToo movement? [It’s important to remember] that the women who signed the piece come from a different generation, they’ve internalised the notion of submission that they were taught. What I feel for them is an immense sadness.

What was it like growing up in Switzerland with a double nationality?

If you see me on the street, you’d never guess that I’m half Algerian. But I still had to cope with endemic racism in school. The day after 9/11, 10 kids who were my friends the previous day were waiting for me at school and said I was a terrorist. The school authorities didn’t react. Years later when I read Hannah Arendt’s The Origins of Totalitarianism and understood how you can become a scapegoat, I could relate. It had happened to me in just one day! Then, you build resistance. You’re told you’re not like the other but you don’t really understand what the ‘other’ is. I only know Algerian culture through my mother and what she told me. I can’t say I have strong ties with the country. That’s why, as a university student, I read a lot about Islam and sufism during my ethnology courses. However, I don’t consider myself a religious person but a spiritual one.

“I’m not one of those girls who ‘don’t have girlfriends’.”

How would you describe your creative process?

I tend to be in control in my daily life, so I enjoy letting things flow in my creative process. Once I wrote three songs in one day. But I can also go two months without writing anything. I don’t really find it appealing to set a daily routine as if this was just any old craft. It’s dangerous to wait for new inspiration every day. I’d rather think of it as something that passes through me. From time to time, I’m a channel for words. Other times, I’m just Amina and that’s good too. Thinking of the artist as a channel, a mediator, is a humble way of approaching creation and it suits me.

You write in French, English, Spanish… Why is that important for you?

The pitch of my voice changes from language to language, so that allows me to explore different personalities. But each language also strikes a different part of me: French is cerebral, English comes from the heart and Spanish, the belly. There’s something schizophrenic yet controlled about this process.

What about your stage character? You once said that you liked it because you were neither pretty nor ugly, neither man nor woman. Can you tell me more about that?

There’s nothing more frightening for me than to be stuck in one place. What I like is sailing from one spot to another, and the same goes for identity. Interestingly enough, people rarely ask about my looks. They have a tendency not to understand who I am, leaving a lot of room for art. It reminds me of the time I shave my head. I was 19 and it was liberating. Suddenly, I was invisible and I had to relearn everything. Of course, with all of these tattoos I’m still Flèche Love at the end of the day because I can’t remove them, but that’s OK too.

When I went to Algeria, I witnessed different reactions. Some women felt honoured while others were shocked, but mostly because it was the year I shaved my head. As for my mother, she got a small tattoo after I started doing mine. I think she gave up trying to convince me to stop doing what I wanted to do. I usually tell her: “It’s your opinion, I respect it, but I’m not going to take it into account.” [Laughs] Also, I think she’s happy that I no longer have harmful habits.

“There’s nothing more frightening for me than to be stuck in one place.”

The invisibility of women in music isn’t as obvious, as there seems to be a lot of female artists. What has your experience been?

In big festivals like Coachella, how many men are there for each Ariana Grande? If you take the men out of the picture, you’ll find yourself with five artists left. When I was on tour last year, I almost never saw bands with female members, whether in Turkey, Greece or Ukraine. As for female technicians, they’re even more rare. But if you look at the history of music, it makes sense. For a long time, women weren’t allowed to play instruments. Violin was considered obscene, the drums were impossible because they made you sweat and the flute? Too much saliva. Women tend to play more melodic instruments, and those are the ones for which there are very few soloists.

You publicly acknowledged experiencing sexism and feeling invisible in your first band, Kadebostany. Many women responded with similar testimonies, telling you about their own difficult experience. How did you react to that?

I was aware that many women had experienced sexism, but I didn’t think I would receive hundreds and hundreds of testimonies. Female chefs, women working in the gaming industry, you name it. Their stories went from anecdotal to actual rape. It was a lot to take in. That’s why, with my sister, we wanted to launch an online platform in 2016 where women could share their stories. But we realised that in Switzerland, there was still a huge fear of the repercussions [of speaking up] so we dropped the idea.

Speaking of Switzerland, what is it like for you being Swiss?

Generally speaking, when you meet people abroad and you tell them you’re Swiss, you’re not allowed to complain. Back home, well… it’s a country that hasn’t been through war, which means that women didn’t have to fill in for men in public spaces. They stayed in their private spaces and that has its consequences. Women were only allowed to vote in 1971. That’s scary.

My impression is that Switzerland hasn’t blown up yet, but there are definitely some underlying tensions. We know the names of perpetrators, we hear them. It’s not my job to speak on behalf of [victims], so meanwhile I try to be supportive. But I know it’s going to blow up at some point.

As a Swiss person living in Paris, do you feel European? What does Europe mean to you?

Switzerland is a bit of an enclave. Now that I live between Paris and Geneva, I see it as a mockup country. Everything looks fake. It’s a fake country with fake people. It’s very odd, I didn’t used to see it that way. You see what’s going on in Europe with the yellow vests or the #MeToo movement and meanwhile, Switzerland doesn’t budge. Not having experienced war, ugly things were created so that the country could protect itself. I believe in energy, and the fact that this country keeps the money of the world’s worst scum – like Mobutu – can be felt here. I think there should be a Black Mirror episode dedicated to Switzerland [laughs].

You know, every year Switzerland or Japan is ranked first in the list of countries with the highest suicide rates among young people. The social pressure [here] is extremely high. In Switzerland, the ideal scenario is to make a lot of money without getting famous.

If you had to suggest one legal reform that would change the lives of European women, what would it be?

There are so many issues I’d like to work on. What jumps to mind is a proposal the Greens in Switzerland made about getting rid of street lighting to save money. No one thought about women’s safety in public. I would say there are a lot of things to rethink in terms of urban planning; to question the public space and how it works. The fact that women don’t feel welcome means that you can’t really be yourself, and that changes everything. It has an impact on the way you behave at work, your ability to say no… so many things. In Canada for example, a friend told me that at night, buses stop anywhere on request so that women don’t have to walk too far. Of course, if you can’t go out as freely because of these [safety] issues, you’re less likely to network and make new contacts. To me, this is key for society to become more egalitarian. So many things could trickle down from this.