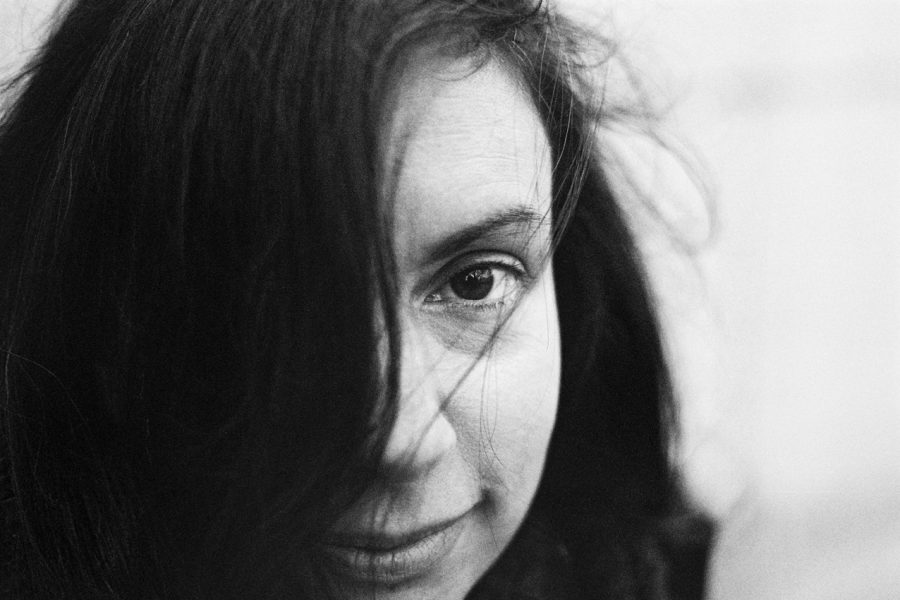 Emma, 38, is a computer engineer and cartoonist focused on gender inequality. Her internationally-acclaimed comic strip The Mental Load condemns the invisible weight women bear when carrying the brunt of household chores.

1980: Emma was born in the French champagne region to a working mum “who did absolutely everything” and a dad “who did absolutely nothing”.
May 2017: Online publication of her comic strip The Mental Load, shared 215,000 times on Facebook, translated into English, German, Italian and Japanese.
May 2017: Publication of her first print comic book Un autre regard: Trucs en vrac pour voir les choses autrement (Massot Editions).
March 2018: Emma is elected as one of the ‘6 women of the year’ by French newspaper 20 minutes.

HISTORY OF WOMEN’S RIGHTS IN FRANCE

1944: French women get the right to vote.
1967: The contraceptive pill is officially allowed thanks to the Loi Neuwirth.
1975: Loi Veil legalises abortion in France.
2002: 11-day paternal leave is adopted.
2014: ‘Loi pour l’égalité réelle entre les femmes et les hommes’ is the latest attempt in France to enforce gender equality. Legislation around equal pay, violence against women, parity in politics and the representation of women in the media is enforced.

Being a computer engineer by day and a cartoonist by night, you’re what we call a ‘slasher’. Do you recall the moment in which you decided to make political drawings?

It was during the protests against the Loi travail in 2016. I wanted to go on strike and my colleagues laughed at me. Being mostly wealthy white men whose wives cared for children, there were some things that my colleagues couldn’t see. They didn’t have to leave work early. They didn’t see what I saw because they had no interest in seeing it.

I was also constantly experiencing microaggressions. I was interrupted during meetings, belittled by my superiors and colleagues, and there was zero space for family issues. So I created my blog Emmaclit to vent my frustrations. That’s how I started drawing. It was one evening, after having bad conversations with my colleagues, that everything had to come out.

Was that the same moment you became a dedicated feminist?

Yes, the suffering was a trigger for my commitment. I realised I couldn’t do anything about it because it had to do with my gender. At first I thought it was my fault, that I didn’t invest enough of myself. But when I started reading feminist writing, I realised that it wasn’t my fault. I understood how the system works and decided to act. It was sudden, like a birth. I think there are many women who have been through the same.

“I was constantly experiencing microaggressions.”

Your comic on the mental load published back in 2017 made you famous overnight. What did it feel like to get that much attention?

I think it’s a huge streak of luck in an activist’s life to unearth something like that, something that’s part of a bigger story. There really was my life before and after the ‘mental load’, this invisible weight that’s placed on us when taking care of children and household chores. Suddenly there was a word describing all of that, telling the story. Things have been moving ever since. But there are people who still think that it’s up to the woman to organise, to ask, or – and this is the emotional burden – to do things nicely, in a pedagogical way to spare their spouse’s ego.

Personally, my success completely changed my virtual presence. I suddenly became a kind of reference but also an object of lust. Overnight, I received all kinds of requests. Some were very interesting and others were marketing-type requests, like diet brands or women’s cleaning businesses who wanted to use the mental load concept to sell their products…

How do comics influence our perception of gender?

I didn’t grow up with comics. I read The Famous Five though, it was quite popular in France when I was little. The heroine is a girl who doesn’t want to be a girl. They are a team of four, but she’s the one leading all the investigations. It really helped me build myself. I also watched the Buffy the Vampire series.

But those aside, you basically had the choice of either projecting yourself in the shoes of a man or those of a princess. We need to produce a more diverse range of children’s books and comics. We need to value tenderness and being gentle as essential male qualities and have girls represented in roles that take up more space. We’re still far from gender equality.

How do you select the topics you address in your comic strips?

I don’t have a long-standing political background, so every time I discover something new that helps me understand the world, I realise there must be people like me out there. I often draw about social inequality, but I draw about other themes like climate change or homeopathy, too. I get to people who aren’t necessarily politically aware and most often, people don’t feel judged by my comics. I also think my work revolves a lot around empathy and that works for a female audience, especially if they have children. We’re seeing the future with our children in mind. On Facebook, 90% of my page’s followers are women.

In Europe, the French woman has been depicted as someone who has children, works and looks perfect – all at once. Do you think it’s symbolic that the most important work on the mental load comes from a French comic author?

For me, going back to work was a relief. The beginning of motherhood was super brutal for me, I was alone and it was hard and no one told me [it would be]. They always say we forget, but I haven’t forgotten. I can’t think back to that time without crying. I found it so hard. My partner was nice but extremely absent at the same time. People say it’s just a phase – that it passes – but I disagree. I really feel like I lost a piece of myself. While my girlfriends were saying, “I can do it, I love my baby,” I was saying, “I want to die.” I sometimes told them I regretted it all. Then, suddenly, they would tell me: “Okay, I’m going to be honest. I’ve been seeing a shrink for six months, I can’t stop crying, I want to shake him.” When you start talking, all the women do the same and this thing breaks free… maybe the myth of the French woman. It’s like omerta. It’s impossible to manage all this without talking about it, so I’m not surprised that this topic was born in France.

Do you think France is a conservative country compared to Germany or Italy?

It’s very conservative. Sexism in France is very clever and that’s something I’ve noticed in engineering circles, where sexism manifests itself in micro-gestures, micro-comments and in ways you have a difficult time pinning down as purely sexist. I don’t want to generalise but in Italy and Spain, machos tend to say things quite clearly. It’s easier to call out.

France is especially conservative among non-activists. Thankfully there’s a culture of activism and rebellion that risks getting lost to the ‘Americanisation’ of the world, but the French keep resisting.

Do you think that the French Ministry of Women’s Rights is a good initiative?

I don’t think it helps all that much. We can’t break the patriarchy without attacking capitalism. A capitalist government like Macron’s is able to do real things for women if it wants to. But that’s not happening. Marlène Schiappa [Secretary of Equality between women and men] brought up street harassment, obstetric violence, paternity leave, but nothing [real] has been done because measures against these things cost money.

Someone once told me they were fed up with “bourgeois, radical French feminism” and that it’s more of a surface act than anything. Do you agree?

I tend to agree. We make posts about feminism or ecology on social media without really knowing what’s behind the cause. As soon as radical movements become popularised, they become misappropriated by other people. Take greenwashing, for example: there are ‘green’ things everywhere but structurally, nothing has changed. The same goes for feminism. H&M makes a t-shirt with a feminist slogan like ‘girl power’ on it, but it’s been produced by girls who work 20 hours a day and who are scared of getting pregnant because they might get fired. That’s the kind of feminism she’s talking about, I think.

In France, new dads are only entitled to 11 days of paternity leave. Why do you think it’s so hard for people to change their minds about this topic?

It’s too expensive for Macron. But then again, why don’t men go out and fight for paternity leave? Because they don’t want to. It’s rotten, it’s unpaid, you’re all alone and you don’t contribute to social security throughout parental leave. For me, it’s kind of surreal. The structure is capitalist and the capitalist logic pushes us towards some advancements for women, like having access to work. But at the same time, it doesn’t solve the root of the problem [which is capitalism].

Are there initiatives that reinforce equality in other EU countries that inspire you?

It’s always a difficult thing to measure. In Germany for example, the maternity leave is much longer but it doesn’t seem as though women are freer. They’re actually often stuck there as there aren’t enough daycare places. With regards to waxing your body hair, it’s cooler in Germany [laughs]. In Poland, there were huge protests for the right to abort. In France, we can’t assemble ourselves for a cause like that anymore. At the end of the day, people really make things happen when they’re being threatened.

What do you think is the most crucial bill to advance women’s rights on a European level?

For me it’s paternity leave. Without that, women will continue to struggle. It should be accompanied by a framework, a salary and structures, and at the same time a certain freedom of choice. It should be at least one year long, with a first part shared between the two – mothers and fathers – and then the mother returns to work and the father stays alone, that’s very important. After, it should be inverted. So both parents have to manage time on their own.

This year marks the 100 years of the suffragettes and one year after the #MeToo movement. What breakthroughs will make headlines in Europe in the coming ten years?

If we don’t have a revolution right now, things will slow down. In France, there was the #MeToo movement [but it was different]. There were lots of women who spoke out but almost right after, men took over the whole media sphere protecting those who were accused and calling women liars because they hadn’t brought their cases to court. What’s more, the fact that living conditions in France (and elsewhere in the world) are getting tougher means people have less time to be concerned. Then you also have the far-right lurking about with backwards speeches about abortion.

It’s not that I’m pessimistic. I trust people, but I don’t have much hope structurally speaking. We’re going to have to force [the people in power].

What’s your recipe for change?

We need to talk to each other more. We need to embody an inescapable power. For that, you have to network and to represent a collective force. Not necessarily a political party but a network of people who know each other, who can contact each other to organise themselves. A true feminine solidarity. But there should be men, too, so that people who want to pass this kind of law are intimidated. Basically, we need the yellow vests of feminism.