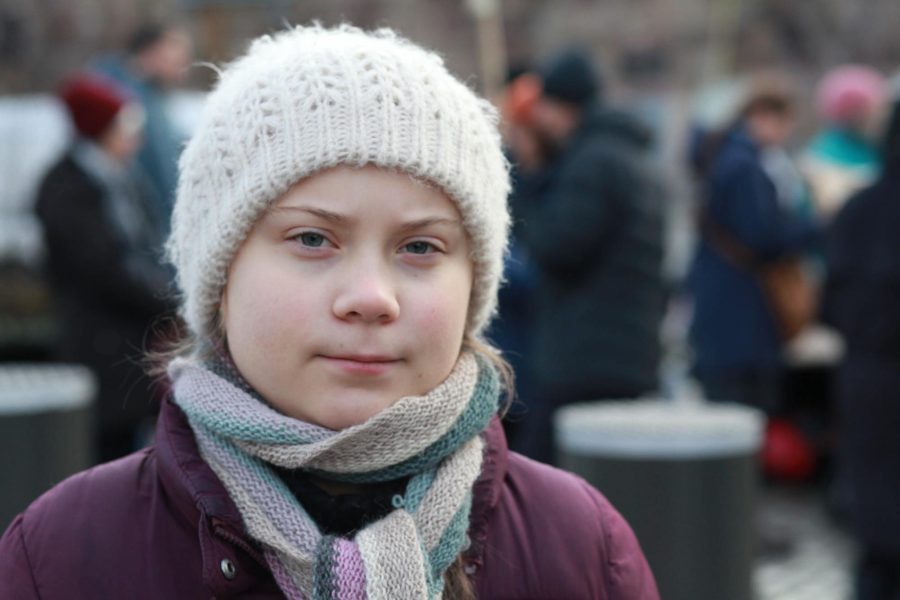 Greta Thunberg, 16, is a Swedish climate activist. In December 2018, her speech at the UN Climate Change Summit in Poland made international headlines after she criticised world leaders for their inaction.

HISTORY OF WOMEN’S RIGHTS IN SWEDEN

1919: Women get the right to vote.
1922: The first five women were elected to the parliament.
1974: Parental leave replaces maternity leave.
1975: Abortion permitted until 18th week of pregnancy.
1980: Law against gender discrimination in working life is introduced.
1983: All jobs are open to women, even within the Swedish Armed Forces.

In August 2018, you started a school strike to raise awareness of the dangers of climate change. When did you feel your voice started being heard?

Do you think people from your generation are more receptive to environmental issues?

I don’t like it when people say one thing and then do something else. That’s the case with the climate crisis. People say: “This is the most important issue of all,” and carry on as they did before. I don’t understand that. For me this is black and white; either we adhere to the Paris Agreement or we don’t. There are no grey areas when it comes to survival. So I started reading about it and I think what sparked my interest was that it was too unrealistic. Climate change threatens our entire existence, and yet no one seems to care or know much about it.

People my age know that global warming is caused by greenhouse gas emissions, which will cause polar ice caps to melt and more extreme weather conditions. But they don’t know what that means and they don’t know about the urgent change that’s needed to prevent it all, either.

What does your family think about your action?

My parents think I should go to school, of course, but they’re happy that [the strikes] only take place on Fridays. They asked me if there was anything else I could do and I told them: “No, this is what I’m going to do.” So even if they don’t support it, they understand why I’m doing it.

Was it a compromise that you would only strike on Fridays?

No, it wasn’t. I sat outside the parliament for three weeks, every single school day. After the elections I thought: “Why stop now when I got so much attention, when people are actually listening to me? If I continue to sit here until Sweden is in line with the Paris Agreement, then it’s more powerful.”

The climate crisis didn’t stop with the elections. It doesn’t really matter which party wins, because no party has the politics needed to meet the Paris Agreement. So if I would have stopped there, it would have been as if I was saying: “It’s over now because the elections are over.”

How do you find a balance between your daily life and your activism?

I’ve stopped doing things I used to do. When I’m at home, I’m either very active doing or planning things, contacting people, or just lying on the sofa. It’s never in-between.

Indigenous communities around the world are not only hit by climate change, but the size of their land is shrinking. Have you spoken to the Sámi community in Sweden, Norway, Finland or even in Russia?

I know some people who are active in that community. They’re fighting to very important things and I admire them a lot, but everyone needs to be a part of this. We need to do everything together.

People know you for your climate activism, but what are your thoughts on the current political climate in Sweden and Europe in general?

Sweden is often seen as a role model with regards to tackling climate change, or narrowing the gender gap. Why are you so critical of it?

Sweden isn’t a role model. It is among the top ten countries in the world with the highest ecological footprints per capita. We live as if we had 4.2 planets, and that in itself isn’t sustainable. I don’t think there are any role models in the world today. If I had to choose one, then maybe I would choose developing countries that have very low emissions per capita. Still, they need to be given the chance to heighten their standard of living as well.

You say our leaders have failed us and they’ll probably fail us again. Do you think going in to politics makes any sense at all? What’s the key to change things?

In general, people don’t have the basic knowledge [they need] about the climate crisis. If they don’t know about it, they can’t pressure politicians and people in power, so they just ignore it. The change has to come from the people themselves, so that they can put pressure on politicians to act.

You shared the fact that you have Asperger’s publicly and in your TEDx talk, you said that you only speak when it’s necessary. How did you react to the diagnosis?

I was very depressed and stopped going to school because I didn’t see the point in living. But then, when I was diagnosed, it sort of confirmed why I’m a different kind of person. That can be a strength because today, everyone acts, looks and talks the same way, and that hasn’t proven to be very successful so we need people who think outside of the box.

How do you feel about being named one of the most influential teenagers in the world by Time magazine?

I was very surprised when they contacted me saying I might be one of them. I was happy that the two girls aiming to ban plastic bags were on the list too. I’m very hopeful because there aren’t that many environmental and climate activists who have been listed so far.

Do you have a role model?

I’m inspired by many women. But if I had to pick a few, I’d say Rosa Parks and Malala Yousafzai, because they are proof that one person can change the world. When you’re in the climate and environmental activism community, I think, it’s mostly women who are engaged and willing to give up some of their habits.

How do you feel about feminism? What is your opinion on gender inequality?

Feminism is very important. We can’t have a sustainable society if only half of the population is included. It’s great that it’s being discussed more and more, but we need to do things that actually make a difference, not just talk about them.

As for gender inequality, in Sweden, we’re better off than many other countries. But men and women are still not equal, not anywhere in the world, and that’s a fact. Just look at who owns the money, who the billionaires are, who has the power, who the heads of state are. Sweden, for example, has never had a female prime minister.

How should we act on this?

If we were living more sustainably, I think people would be more equal. There wouldn’t be such a difference in people’s lifestyles and everyone would live within the planetary boundaries.

“I think women and many girls, including me sometimes, are not taken seriously.”

What do you think about the #MeToo movement? Have things improved in Sweden?

I’ve talked to many women who say its made a huge difference in their lives, like my mum or my sister, and that’s good. A conversation has been sparked here in Sweden, but there’s more that needs to be done

What are the main problems young women are facing in Sweden today?

Where do you see yourself at the age of 30?

Hopefully I won’t be working on fighting climate change because that would mean everything would be fixed, but I probably will be. I think more people will work in this field because it’s only going to get more and more serious.

What makes you hopeful? Desperate?

I’m hopeful that people aren’t aware of the situation. If they were and carried on acting this way, without protesting, it would mean they are evil. But they don’t know. So I’m hopeful because humans aren’t evil, we’re just uninformed.

Many things make me desperate, but one thing I’m very afraid of is that – once we reach a certain point – there is no going back. We’ll start a chain reaction, triggering events beyond our control and there will be no stopping it. That’s very scary.