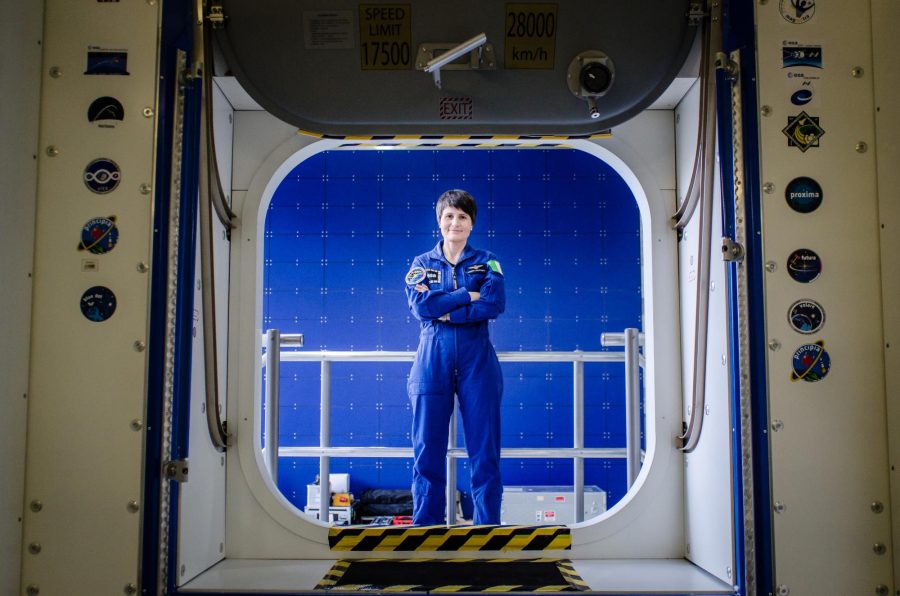 Samantha Cristoforetti, 41, is the first Italian woman to make it into space, holds the record for the longest uninterrupted mission of a European astronaut, and previously worked as an engineer and an Italian Air Force pilot.

April 1977: Samantha Cristoforetti was born in Milan and grew up in Trentino-Alto Adige/Südtirol
May 2009: Cristofetti was selected as an astronaut by the European Space Agency
23 November 2014: Cristoforetti and the crew of Expedition 42/43 launched aboard the Russian spacecraft Soyuz. They returned on 11 June 2015, after orbiting around the Earth on the International Space Station for 199 days.

HISTORY OF WOMEN’S RIGHTS IN ITALY

June 1946: First female suffrage of Italy (the institutional referendum that declared the Republic). 21 women were elected in the Constituent Assembly.
May 1978: Abortion becomes legal.
August 1981: Honour killing is officially banned, along with the “rehabilitating marriage” to compensate rape.

Why did you want to become an astronaut?

It’s been my dream since I was a child so it wasn’t a difficult decision to make. When the opportunity presented itself, I immediately knew I would try it out.

You’ve been working in traditionally male industries like the army, aviation and aeronautics. As a woman, what kind of difficulties have you faced throughout your career?

I can’t single out specific difficulties or moments I’ve encountered because of my gender throughout my career. If I picture my story as a man, I honestly couldn’t think of anything significant that would have been different. But that doesn’t mean it’s typical, maybe I’m atypical myself. It’s difficult to draw general conclusions from a single story. It’s up to those who work with large numbers to observe and study general phenomena.

That being said, I would like to clarify something: I don’t think gender is neutral… it’s unreasonable to think so. There were probably people who consciously or unconsciously facilitated my success and others who did the opposite, but it’s impossible for me to know. I don’t want to dismiss the struggle many women speak about in any way, [I just think] we all have our own experiences.

What do you think are the main qualities you need to become an astronaut?

It’s hard to say, we’re all different. If I compare myself to my colleagues, we all have different personalities. There are some who are more outgoing whereas I’m more introverted. Being an introvert is OK, but you definitely shouldn’t be shy. You have to be ambitious without being unscrupulous. You have to be prone to working in a team and put aside your own interests for the sake of the group without being too altruistic, if not it would be difficult to reach certain personal goals. You should be generally curious and capable of learning a diverse range of skills, it’s not a profession for highly-specialised people who want to be the best on a very specific topic. I don’t think that any of us would have become Nobel prize winners if we weren’t astronauts. We all love trying new things and theory just as much as practice; the intellectual part as well as the physical part. The peculiarity and the beauty of this profession is that you do so many different things, but they are all part of the professional ‘routine’.

“It’s important to be humble when you succeed, and compassionate with yourself when you don’t.”

You broke the record for the longest serving female astronaut in space and you were the first Italian woman in space. How do you feel about that? Are they achievements or just the beginning?

I wanted to be an astronaut, not the first female Italian astronaut [in space]. It’s not like I thought to myself: “If another woman did it, I might as well do something else.” It was a dream, a very big dream unlikely to come true, which depended a lot on circumstances being in my favour. I hope I made that clear in my book. In it, I tried to highlight all the lucky circumstances that allowed me to reach my goal.

It’s important for me to be honest about it because there’s a common misconception about brilliant success… As observers, we tend to think that these success stories have some kind of special talent or secret formula behind them. Many journalists ask about these secrets, but beyond talent and hard work, there is just the fact that these people have been luckier than others. Who knows how many people in my generation could have been good European astronauts, but it’s just the six of us. If I would have broken my leg during the selection process I wouldn’t be here. So many things go beyond our will-power! We often believe in this myth of being creators of our own destiny, which is good to believe in when we’re young and building a future. But when we grow up and mature, that belief becomes mitigated with circumstances. It’s important to be humble when you succeed, and compassionate with yourself when you don’t.

You spent almost 200 days in space. Was there something on Earth that you missed?

Except for a shower, nothing in particular!

How did you deal with fear or loneliness?

When you’re up there, you’re never alone. There are six astronauts and that doesn’t mean it’s claustrophobic. On the contrary, the ISS is very big so it’s really easy to find privacy if you need it. But it’s also a bit like being in college; there’s always someone around. Solitude doesn’t belong to this experience and neither does fear. We didn’t have particularly critical situations during our mission apart from an ammonia leak false-alarm. But from the start, we were confident that we weren’t in immediate danger.

What was harder: becoming an astronaut or a mother?

I don’t know what was more difficult. In general, I think we should free ourselves from ‘ranking’ things the way journalists do. Real life experiences aren’t like that, you can’t quantify them. [There is no] this is bigger than that, that has a higher score [than this]. Each of these experiences equally contribute to your path.

“I wanted to be an astronaut, not the first female Italian astronaut.”

Did you have icons or role models while growing up?

I didn’t have an icon. I didn’t hang any posters up in my room, only galaxies, a spaceship and airplanes. The only people on my wall were the Challenger’s crew, who all died in 1986. It was a nice way to honour them. I never idealised anyone because maybe I understood that, underneath the success, we’re all the same; we all have our strengths and weaknesses. Still, I was pretty obsessed with Star Trek and other science fiction stories. I think they contributed greatly in sparking a passion for space when I was a kid, building a basis for my interests as an adult. That combination of fantasies was important in building my dream.

Are you a feminist? What does being a feminist mean for you?

I don’t consider myself a feminist, basically for respect of the word itself. I think feminism implies a sort of activism and a vision to improve not one individual’s conditions, but those of women in general. I don’t think I’ve ever done that for several reasons. There comes a point where you have to choose what you focus your energy on. I certainly have no desire to distance myself from the feminist ‘world’, it would be like biting the hand that feeds me. If I was ever able to achieve something in life, it was thanks to feminist women and men who took a stance.

Do you think that gender inequality is a problem in Italy? What is the main issue women in Italy face?

I’m afraid this topic goes beyond my competences. I don’t want to portray myself as an expert when I’m not. In general, I think it’s better to speak publicly about something when you know what you’re talking about.

But having lived half of my life abroad and half in Italy, I can safely say that there are differences. Not all countries are equal. For example, female presence in the public discourse changes a lot from country to country. Many countries are ‘better’ than Italy in that regard, but many others way worse. When it comes to analysing the reasons why, I honestly don’t know. I’m sure that there are complex historic, cultural and economic reasons.

On Twitter you describe yourself as a “European of Italian nationality”. What does being European mean to you?

I’ve had the chance to live outside Europe for long periods of time, and when you do that you realise that we share a strong common European identity. It’s hard to explain, but you can feel it. When you are among Europeans outside Europe, you feel as though you have something in common. For me, we’re all human beings and that’s the first and most important layer of identity. Then there is this second layer that is ‘Europeanness’, then the national identity, which can be very strong. We also have quite a strong sense of regional identity in Italy, don’t we? Even if we strongly support our local football team, nobody will question the fact of being Italian let alone European. We should be aware of this identity and be proud of it, but in a good way, so as to not debase other identities. We have a long history and we’ve had a strong influence on the rest of the world, for better or worse. Let’s hold on to this common identity we share.

“I don’t consider myself a feminist.”

What do you think of the rise of populism, or the lack of awareness regarding environmental issues?

I don’t see the two topics as directly related. What I see is an alarming skepticism towards the world of experts, people that are competent in a subject. There is also a tendency to question institutions, the community of experts, who are guardians of specific knowledge. We need to rebuild trust. It’s probably something that needs to be worked on on both sides.  Statements like: “People who don’t trust science are silly and need to be educated” won’t solve anything. What needs to be understood is that the process of opinion-making of non-experts is affected by many elements that need to be taken into consideration, like values for examples. You can cite a proven fact but if that fact goes against someone’s values, there’s a problem. People will reject it.

At first glance it looks very small. You realise it’s small compared to other continents. You can also see intense human activity, especially at night. In the daytime you hardly see that. At night, it looks so bright and so well-defined in its shape and contours because of all the coastlines. And of course, as a European woman, I have an emotional relationship to the continent. It evokes a sense of history for me, of literature. It is its own epic. I guess each astronaut has the same feeling with their own home!


“Diario di un’apprendista astronauta” is Samantha Cristoforetti’s autobiography published in Italy by La Nave di Teseo. It will be released in Germany in summer 2019 and in English in 2020.