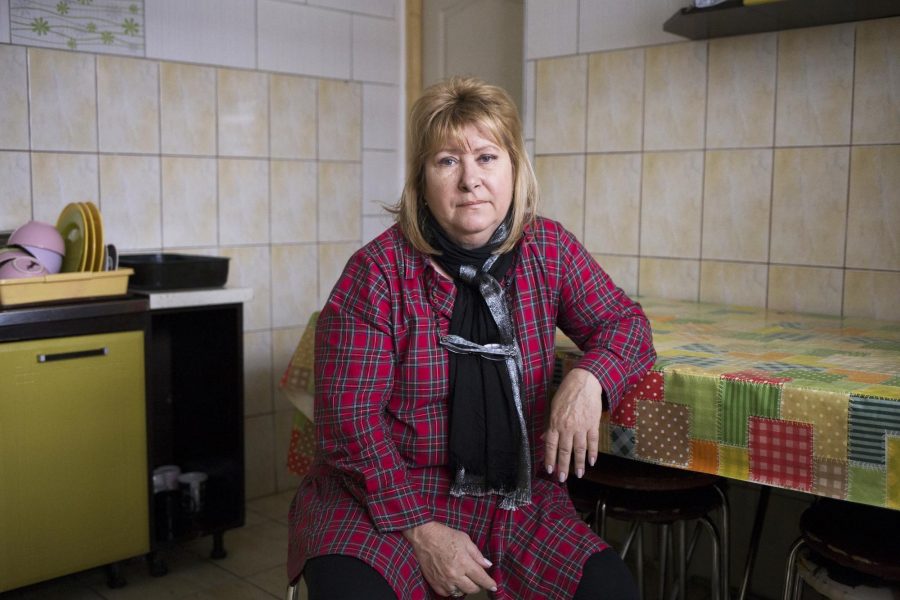 Iana Matei, 59, is one of the most well-known and respected activists in Romania. She is the founder of Reaching Out Romania, an organisation focused on helping victims of human trafficking that opened its first women’s shelter in 1999.

30 April 1959: Born in Orăștie, Romania.
December 1989: Left the country during the Romanian Revolution.
June 1990: Found Reaching Out Romania, an organisation that helps victims of human trafficking and sexual exploitation.
2011: Published her book For sale: Mariana, age 15.
2006: Awarded “hero of the year” by the U.S. Department of State.

HISTORY OF WOMEN’S RIGHTS IN ROMANIA

You studied psychology. What made you decide to work with victims of human trafficking?

In 1998, while I was running a programme in orphanages I was called by a police officer who told me they had three prostitutes at the station. The girls needed clothes and food as they were going to be taken to a doctor. I went to help out and found three terrified girls, only 14 and 15 years old. I asked them how they got into prostitution and they said they had been sold and bought. That shocked me. I couldn’t process it at first. Who sells people? Who sets the price? While the officers were telling me that, after their doctor’s visit, the girls would be free, they were signalling to me out of desperation. They were scared of going back on the streets. So I ended up renting an apartment for them in Pitesti and by May 1999, we were housing 16 girls in a 3-bedroom apartment. I had to rent another one.

The problem was that nobody cared about them. I called USAID to ask who dealt with abused and sexually exploited children, and everyone was asking me if Romania really had that problem. Since no one was helping these children, we decided to get started.

You were a victim of domestic violence yourself. Did your experience affect the way you engaged with these girls, who were beaten by their traffickers?

Not really, no. I got very angry when I realised the situation the girls were in. When I first found them at the police station I called social services and child protection, and a sociologist came over. I told him they couldn’t go back out on the streets and his response was: “Well, I can’t put them in an orphanage either because they’re a bad example for the others.” He said it nonchalantly while looking at them. They were minors, they had gone through a huge trauma and instead of helping them, we were judging them. That’s when it clicked. I was shocked by the injustice and the ease with which these people were talking about their situation.

“The Romanian Revolution of 1989 completely changed my life.”

Courage doesn’t mean you’re not afraid. Courage means you’re aware of the risks, but you keep on going. The 20 years I spent working in this field taught me that traffickers are actually very lazy people. That’s why they exploit women. They can hit them. They are machos. But when you show them that you’re not afraid, they’re speechless. They’re so used to threatening people, telling them they’ll cut them, hang them or whatever. So when I insist on meeting them and I actually speak to them, their minds are blown. [They think]: “What’s going on?” “Who is she?” “Who has her back?”

And who has your back?

Did you grew up with any role models?

No, not really. I never thought I would end up doing this kind of work. I liked painting and my life was going in another direction until I arrived in Australia and studied psychology. I just think that when you’re in a privileged place in society, and you can help others get there, it’s only natural [to do so]. I don’t think I needed a role model to help exploited and beaten-up girls leave their trauma behind.

It was OK, but nothing spectacular. My mother was focused on her family, on raising her baby, but she didn’t say “I love you”. She would show it. She would crochet wonderful things for me and I understood later on that it was her way of showing me love and compassion. Under communism, it was normal not to tell your kid you love them because if you did, people believed they would become brats.

And did you miss those declarations of love?

Yes, very much. Now I always look for a second opinion. If I do something good, I stop immediately to analyse it. It provoked a need for perfection that can sometimes become toxic.

How did you experience the regime change? You participated in the revolution in 1989 and then left the country illegally. What are your memories from this period?

The Romanian Revolution of 1989 completely changed my life. It was the moment I decided a regime change wasn’t enough, that I’d have to change the country.

I was protesting in Piata University in the centre of Bucharest since it started in December 1989. I was also encouraging my colleagues to go out [and do the same], which caused me problems at work. I was working at a factory at the time. One day, when the police came to the square to attack the protestors, some colleagues and I found a taxi driver who agreed to take us home. But I realised that I had lost my purse somewhere on the streets, with all of my documents. I knew that if I went home, the police would probably be waiting for me, so I decided to stay with a friend.

My ex-husband had told me that there was a place on the border with Yugoslavia where I could pass through if I walked along the river. When night fell, I left. I took a bus and when I arrived in the village, I started walking.

By yourself? Alone? In the middle of the night?

Yes. There was a corn field on my left and the small river on my right. There were willow trees here and there. It was actually quite beautiful. The sky was filled with stars; it was just me and god. When daylight came, I lay in a ditch near the corn field. When I woke up, I had pneumonia. I had to wait for night again to continue my journey. I finally reached a road and went into a man’s backyard only to find a huge strip of land. That’s how I entered Yugoslavia. I saw a sign and I knew I was safe, but I noticed that the riverbank was littered and it was way harder to walk. Eventually, two Serbian police officers arrested me and locked me up for 10 days. One month later, I was granted refugee status and moved to Australia.

Why did you decide to come back to Romania after 10 years in Australia?

In april 1998, I came to Romania on a short vacation. During that visit, I saw kids living on our streets and it struck me. I returned to Australia, where I had started a project with street children, but couldn’t shake off what I had seen at home. So a few months later, in October the same year, my son and I decided we would come to Romania for a year or two, to implement projects here. But I could have never anticipated how inhuman and horrible human trafficking is, and that hit me. Hard. So we never returned to Australia.

How do you reconcile your family life with your activism?

Well, I’m divorced and my son Stefan was always by my side. In fact, when we had first opened the centre [for victims of human trafficking] I used to live there with the girls, because we couldn’t hire anyone else. Stefan would come after school and later told me that he thought his mission was to make the girls laugh to forget their traumas.

Do you think the girls trust you because you’re a woman?

In my relationship with the girls it helped a lot, because only a woman has the maternal instinct and can relate [to them] in that way. With the authorities, though, I was more devilish, determined and despicable.

Generally, emotionally speaking, I think that women are richer than men. We’re stronger. I wouldn’t change things for the world and I thank god he made me a woman.

How have women’s conditions changed since the fall of communism?

Something has changed, but not enough. There is a higher level of conversation. But in any given village, women still work all day and raise their children basically alone. Men need to be educated in sharing responsibilities and learning how to respect women.

Upon joining the EU, men started speaking a bit differently, but still believed in the saying: “Beat your wife when you get home from work, she surely deserves it.” In their minds, the women is always at fault.

I remember training police officers on human trafficking and they said: “Wait, why are you saying these women were coerced? They chose to become prostitutes!” They thought women chose to be exploited. Their final brilliant thought was: “Well, it would be better if they cleaned toilets.” My answer to them was: “Guys, there are not enough toilets in this country for all of the victims! You want to help? Then build toilets!”

Apart from domestic violence, what are the biggest problems for Romanian women?

A lack of education, and poverty. Women in poor, rural areas don’t go to school. Some of them end up trafficked, sent into the streets by their own mothers. Women are the poorest, but single mothers are even poorer. Poverty nourished domestic violence. Women become convinced that, if their husbands don’t beat them, they don’t love them.

Who is a woman’s biggest enemy?

Herself. Women refuse to get an education, stand up for their rights, support one another, have courage… We take the position of a hedgehog most of the time, waiting for danger to pass, because under communism we learned that we couldn’t change things.

There’s also a lack of role models in Romania. The media plays a huge role in that, because all you can see on TV are women who teach other women how to put on makeup, how to cook or how to please their husbands.

What did you think of the #MeToo movement?

It hasn’t reached us. I don’t think women are aware of what sexual abuse means. If a woman’s boss touches her ass, she thinks it’s OK. If he flirts with her, she shrugs it off as a joke and doesn’t even notice the harassment.

But you don’t think that joining the EU changed things for women in Romania?

As I said, women became more courageous. They’re the first to pack their bags in search of a better life. Unfortunately, most of them have fallen prey to trafficking and that’s the most important thing we need to know about Romania joining the EU. Because authorities aren’t coming up with preventative measures, Romania joining the EU was both an open gate and a trap. Especially for women.