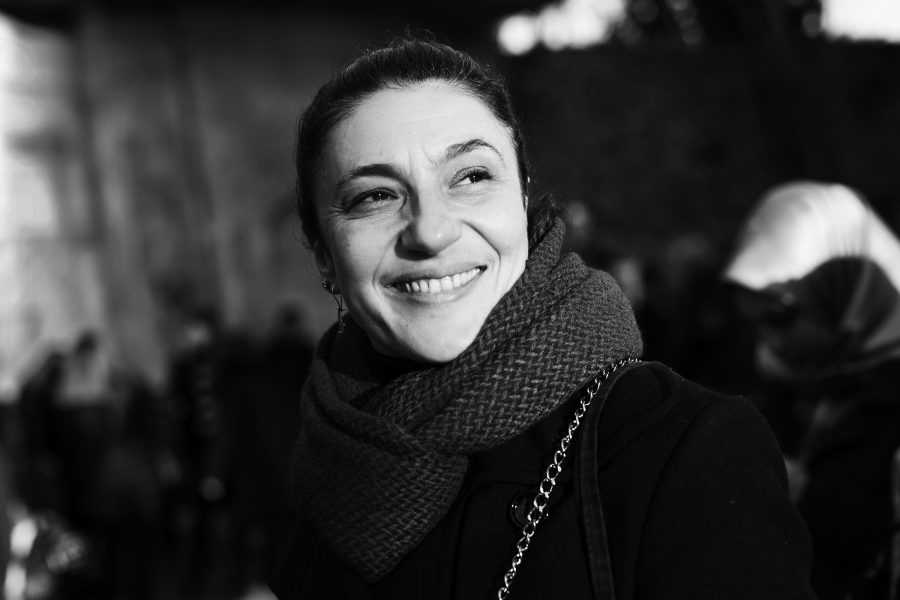 Gülsüm Kav, 47, is a Turkish doctor and activist who co-founded We Will Stop Femicides, a grassroots platform where female volunteers fight against gender-based violence and impunity.

1971: Gülsüm Kav is born in Amasya, Turkey.
1997: She graduated medical school and started working as a medical doctor.
1998: Gülsüm moves to Istanbul where she joins organised feminist protests.
2004: Güldünya Tören is raped and killed. Gülsüm participates in her first large protest against the femicide.
2010: Gülsüm along with other activists creates We Will Stop Femicides.
2017: She co-founded the Women’s Assembly, a grassroots movement to fight for women’s rights in Turkey.

HISTORY OF WOMEN’S RIGHTS IN TURKEY

1923: Mustafa Kemal Ataturk declares Turkey a separate country, a modern republic, with secular laws. Foundation of the People’s Party of Women was formed but the government banned the party, saying women could not be representatives because they didn’t have political rights. So the party turned into a women’s union.
1934: Women are recognised as full citizens, including the right to vote.
1983: The government legalises abortion, one of the few Muslim countries to do so.
1991: Foundation of the Ministry for Women tackling gender issues by the social democratic government.
2002: Reform of the Turkish criminal and civil rights code. Women are granted equality within marriage, divorce and property rights.
2011: Turkey signed the Istanbul Convention.

You’ve been an activist longer than you’ve been a doctor, and We Will Stop Femicides has become one of the most successful women’s rights advocacy groups in Turkey. Why did you choose to focus on femicides?

There were pivotal events in Turkey that shaped my activism, and it was often men murdering women, then society and the government blaming the victims. In 2004, there was the case of Güldünya Tören, for example. She gave birth after being raped. Her brothers tried to kill her but she survived and ended up in hospital. They ended up finding a way in to the hospital and killing her there.

[That’s when] I went to my first protest against femicides with a group of women. The murder was considered an ‘honour killing’ and the fact that it took place within a family gave the men reduced prison sentences. For the press, an honour killing is seen as a crime of passion. It’s a way to reduce murder to something less [serious] when what’s happening is actually femicide. If men would be held accountable for that, their sentences wouldn’t get reduced. In 2005, women were heard and the law changed, making honour killings carry heftier penalties than regular ones. But in many cases of femicide, men still get reduced sentences for something as ridiculous as wearing a tie in court during their trial.

After I arrived in Istanbul working as a doctor, I became involved in more organised women’s movements. The late 90s was a tumultuous time in Turkey, and all kinds of different women – poor, rich, secular, religious, Kurdish – came together to protest the violence and discrimination they were subjected to. It was intersectional feminism. The 8th of March, International Women’s Day, was crucial in Turkey for us to make our voices heard. In 2010, when Munevver Karabulut’s boyfriend killed her, a 17-year-old, and President Erdogan along with Istanbul’s former chief of police blamed her family for letting her stay with him, women became enraged. That’s when we grouped different women’s organisations and created We Will Stop Femicides. Our goal is to raise awareness, provide moral and legal support for families of victims and lobby for the government to change its sexist policies.

How did your family and upbringing affect your views on gender? Who were your role models?

I grew up in a secular household but if someone wanted to practice their religion, they could. My role models were my mother and aunts. They were resistant, worked hard and multitasked. One of my aunts got a divorce and I watched how hard it was for her, being a divorced woman. Once she saw my crying over a boyfriend and told me: “Don’t ever shed one tear drop over a man.” She had to move back home with her family and eventually had to marry an older man. I was married for three years. I realised marriage wasn’t for me readuring the wedding ceremony, it perpetuates the patriarchy. My husband and I divorced amicably and we’re on good terms. We’ve both moved on. I don’t judge women who get married or have children, but it’s not for me.

At first, my family wanted to protect me and kept a distance from my activist work. But when I became a doctor and was financially independent – and I can’t stress that enough, that women must free themselves from men financially – my family respected my activism and started getting involved. They donate money, share news about me and our platform, participate in events and some of them even opened their houses for our events. They’re proud and supportive of the feminist struggle.

My views were formed within my family and then later as a family doctor. I saw the first-hand violence women faced and how they hid it because they didn’t feel safe speaking out. My patients would take antidepressants. That’s how they would mask the psychological damage the men in their lives caused. I came to understand that violence against women included psychological and economic abuse as well.

“I don’t judge women who get married or have children, but it’s not for me.”

What has been your biggest success? Failure?

My biggests successes have been co-founding the platform, convincing this society that femicide is a big problem and changing the terms from something that falls on the shoulders of victims to what it truly is: cold-blooded murder. My biggest failure is not learning English, which has been a goal of mine for a long time. Oh, and not being able to quit smoking.

Does being a woman make it easier or harder to do what you’re doing?

Harder, of course! There’s even a song in English by a well-known Turkish singer named Dilek called “It’s hard being a woman”.

How has the role of women in Turkish society changed since the religious Justice and Development Party (AKP) rose to power in 2002?

This government has been through different phases. At first, Turkey wanted to join the European Union and that led to some reforms for women. But women were fighting hard to pass those reforms. The Istanbul Convention called for laws that would give women equal access, and due punishment for violence against women. Much of it hasn’t been implemented. The government is trying to replace the woman hired to make sure the policies went through so that the agreements can be ignored.

The government has erased the word ‘women’ from what was the Women’s Ministry, so now it’s called the Family Ministry. The president says things like, “Women must have children and get married.” Women aren’t recognised as individuals but as extensions of men. When politicians and their pro-government media advocate this mindset, it has an impact on the way women are treated. The president said women are entrusted to men, and that gives men the right to do anything they want with them.

But at the same time, women from all walks of life have become more aware and are fighting back in different ways. They’re becoming more educated, economically independent, leaving abusive marriages and joining the fight against the violence they’re facing.

According to We Will Stop Femicide, the number of women murdered by a partner or relative in Turkey increased from 237 in 2013 to 409 in 2017. How do you explain that increase in murders?

There are several reasons. Violence is no longer contained in the private sphere, women are making it public; reporting cases and taking their abuse with them to court. In turn, murders are becoming more visible. But it’s also because men aren’t willing to give up their power. When women resist, they abuse and kill them. As women become more empowered, men use violence to punish them. This is a symptom of modernisation and urbanisation.

The government’s rhetoric that women are to blame for the violence is fuelling the violence. When men know they’ll get reduced sentences in prison or no punishment at all, they keep abusing their women. There’s no political will from those in power in this country to stop violence against women.

But this isn’t only a Turkish problem, and many people in Europe think that the men who commit violence in their countries are immigrants. It’s discriminatory and it’s false. Men everywhere kill women they know. The lead singer of the French band Noir Desir killed his girlfriend. Across the globe, a woman’s biggest enemy is the patriarchal system.

“It’s not just a fight for women but for democracy.”

What is the most concrete issue Turkish women are facing today?

Men are beating and killing us, and part of that is because women are financially dependent on them. Unemployment for women in Turkey is a big problem. We have too many women who aren’t taking part in the workforce. We’re behind all other European countries, even Iran. We’ve seen that, when women join the workforce, men step back and violence against women decreases. The construction industry is one of the biggest in Turkey and women don’t even make up 1% of that industry.

What do you think of the current global revival of feminism and the far-right’s reaction to it?

Women are fighting harder as a reaction to the far-right and increasing misogyny in the world. I see the #MeToo movement as part of this solidarity and reaction to long-term abuse of power. As a socialist feminist, [I think that] human exploitation has to end for women’s rights to be realised.

How European is Turkey?

Turkey is a bridge between Europe and Asia, and yes, the geographic part that’s located in Europe is European. But I’d like to see Europe have the political will to accept Turkey as European. Europe isn’t a monolith and Turkey probably fits in more with other Mediterranean countries like Italy and Spain. We have similar issues and a shared mindset.

What is it that makes you anxious about Europe’s future?

The increase of misogyny and racism, the rise in far-right politics and fascism. But I’m also scared of the lack of solidarity among European women to form one overarching entity that fights femicides. We need women from all sides – all nationalities, races and classes – to join the struggle for women’s rights. I don’t see that happening right now.

Is there an international law or policy that can improve women’s lives in Turkey and the rest of Europe?

We have the Istanbul Convention (2011) with signatories from many countries that guarantees rights for women. The problem is laws in books have to be implemented and in Turkey, we’re moving farther away from making the laws a reality. So we’ll continue the struggle. It’s not just a fight for women but for democracy.